In 2001 the International Data Corporation (IDC) published a white paper showing that company workers responsible for dealing with documentation were spending up to 2.5 hours per day searching for what they needed. More recently in a white paper published by IDC in 2012, based on a global survey of 1200 information workers and IT professionals, workers reported spending an average of 4.5 hours a week simply searching for lost documents. To break that down even further, workers are spending half of those 4.5 hours searching for, and not finding, the files they need. Then, once they give up the search for the needle in a haystack, they spend the latter half of that time recreating what they haven’t found. So it seems that despite leaps forward in file and document storage, the challenge of locating information may have improved but it has failed to disappear. 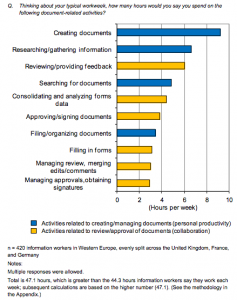 The major take away from the study seems to be that there is a huge difference between efficient and effective storage. Without a doubt, local computer or cloud-based storage are efficient methods for holding information; no one is questioning that. However, without a system to provide an overarching structure, disorganization and mistakes are bound to occur. In the virtual world, just like with paper-based systems, naming something incorrectly or saving it in the wrong place can mean hours spent repeating work that’s already been done. Yet this happens all the time.

While the time spent searching for “lost” documents that have simply been named incorrectly or stored improperly is a huge (annoying) waste of time for employees, it’s an even bigger waste of company resources. Being able to access accurate information quickly is an important component of good decision making, and not having all the information can cause serious erosion in your decision making processes. On top of that, the time workers spend looking for information can, at its worst, be as if 1 out of every 5 employees simply didn’t go to work. That’s 20% of the workforce scrambling around looking for and recreating documents that have already been written, which is a serious financial implication as well.

Two of the biggest objections land management companies face when contemplating an investment in a land management system are the perceived price and unknown complexity of the system. In particular, the cost of a land management system in both time and funds are perceived by small to midsize companies as just too high to justify. The initial cost of a new system is often viewed as a “hit to the books”, while losing resources to inefficiency is just part of the cost of doing business. In an increasingly competitive business world, no company can afford to throw away 20% of its resources to wasted efforts and duplicate tasks, particularly those where staff are already wearing multiple hats.


Dollars to donuts, no company (big or small) should be throwing away valuable resources. An effective land management system helps you to keep your information structured by providing a location-based hierarchy, where information is rarely more than three clicks away.